Q. What are key factors shaping bilateral relations between Iran and the Republic of Azerbaijan?

It's well-known, Iran was among the first countries to recognize Azerbaijan’s return to independence in 1991. Iran established diplomatic relations with Baku in March 22, 1992. Since the Soviet disintegration, however, the unstable and sometimes complicated Iran-Azerbaijan relationship and Iran's attempts (from time-to-time) to flirt with Armenia clearly indicate Tehran’s discomfort with Azerbaijan’s existence as an independent and secular state. This key point in Tehran’s calculations towards Azerbaijan has deep roots.

Historical Factor: Since ancient times, the Azeri Turks and Azerbaijan were both heart and part of the Iranian (Persian) Empire. Azeri Turk dynasties like the Ghaznavids, Safavids, Qajars, and others played a key role in expanding and defending the Iranian Empire, and the Azerbaijani city of Tabriz served as capital of the Empire for centuries. Several Iranian shahs, in fact, are of Azeri Turk origin. It was only in the nineteenth century with the 1828 Treaty of Turkmenchay that Imperial Russia gained control of part of the Iranian Empire, the then semi-independent northern Azerbaijani khanates. These territories became the nucleus for the modern-time republics of Azerbaijan and Armenia. The Iranian Empire officially renounced its claim to the northern Azerbaijani khanates, leading to the division of Azerbaijan into two parts: Northern Azerbaijan or Russian (Soviet) Azerbaijan and Southern Azerbaijan or Iranian Azerbaijan. Since the Soviet Union’s collapse, this history has created an illusion among Iranians that Tehran’s government has the right to take Azerbaijan back under its control or, at least, to intervene into Azerbaijan's politics and, so, to manipulate the Azerbaijan’s future in accordance with Iran’s interests. Baku’s assertion of independence and its clear unwillingness to be re-incorporated into Iran has made for a rocky relationship with Teheran.

Political Factor: On May 28, 1918, following the collapse of the Russian Empire, Azerbaijan declared its independence and identified itself as the Azerbaijan Democratic Republic (ADR, 1918-1920). Iran, at the time, has attempted to reincorporate Azerbaijan, but the ADR government refused it and established direct relations with the Entente governments in order to secure its independence. In 1918, the Azerbaijan Democratic Republic adapted a secular ideology (that is significantly before than Kemalism in Turkey) and a political system which were based on the principles of Western-style democracy and established a multi-party parliament. It was the first time in Muslim history that Muslim state established pro-Western style state adopted a multi-party political system. It was occurred significantly before than both Turkey of Kemal Pasa or Shah's Iran.


Thus, the ADR was the first Western-style state in the Muslim world. It declared equal rights to all citizens, including ethnic minorities, men, and women, and granted Azerbaijani women the right to vote. Today’s Republic of Azerbaijan is a successor of ADR and shares its political and ideological values. It is a secular and pro-Western nation in the South Caucasus. The country’s political development has very much differed from that of the Islamic Republic of Iran, though they both have predominantly Shi’a populations.
Ideological Factor: Azerbaijan’s secular and Western-style statehood is based on an ideology that totally contradicts that of Iran. Tehran’s mullah government considers Shi’ism a unique ideology and a powerful force to unite the nation. The Iranian government has thus strengthened Shi’a ideology and suppressed the identities of the ethnic minorities in the country, including Azeri Turks (Iranian Azeris). It has also attempted to eliminate independent Azerbaijan’s ideological and political impact. Interestingly, Iran’s Azeri Turk Safavid dynasty officially converted Iran from Sunni to Shi’a at the beginning of the sixteenth century. Shah Ismail Safavid, an Azeri Turk and founder of the Safavid dynasty, is an important historical figure both in Iran and in Azerbaijan. While Iran follows the Shi’a ideology, Azerbaijan has adopted Azerbaijani nationalism that is based on the ADR’s ideological and political values as well as on Azeri Turk or Turkish identity. Thus, despite its common historical heritage with Iran, the Republic of Azerbaijan has close ties with Turkey and shares the late Azerbaijani President Heydar Aliyev’s “one nation, two states” ideology and strategy with the Turkish Republic. Even after the coming to power of an Islamist-oriented, post-Kemalist government in Turkey, this relationship continues and it supports Azerbaijan’s sense of identity. On the other hand, the Azerbaijani government considers nationalism and Kemalist ideology as well as the “one nation, two states” strategy as powerful tools to contain Iran’s attempts to strengthen Shi’a ideology in Azerbaijan, which has created a major ideological gap between the two countries.

Finally, Tehran’s attitude toward Azerbaijan is deeply rooted in the history. The fundamental and most influential factor in Tehran’s relations with Baku is that of two “divided” Azerbaijans. The mullah regime in Tehran is greatly concerned that Azerbaijan’s success as a secular and independent state could inspire or ignite Iranians to bring about the downfall of the current regime in Iran. Thus, the existence of independent Azerbaijani Republic is a major factor in Iran’s internal and foreign policy.

Email ThisBlogThis!Share to TwitterShare to FacebookShare to Pinterest
Location: Canada

THE SOUTH CAUCASUS: AZERBAIJANI KHANATES AND GEORGIA IN 1799

Azerbaijani Khanates and Georgia: Map of Caucasian Boundaries in 1799
azglobalcontext.org 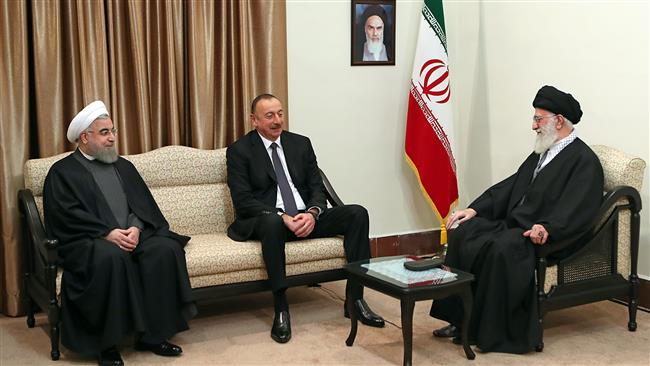